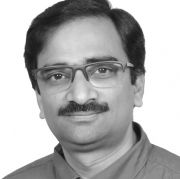 Vipul Kocher is an ex-Adobe engineer and IIT alumnus with a 25-year experience in Software Development and Testing industry. Besides being the creator of AiU – the world’s first AI testing certification, DoU - DevOps united and others, Vipul is also President of the Indian Testing – ISTQB Board, Convenor of STeP-IN forum and National Convenor of Indic Academy, to name a few.

He is the founder of TestAIng - world’s first AI focused testing services company and Verity software – a training company.

He has won several awards including the best paper award at STAREast 2006 and the Logica CMG Triple Star Award for the most original contribution at EuroStar 2005.
He has been a Keynote speaker at many testing conferences worldwide.

Vipul invented Q-Patterns, a method of capturing testing knowledge and writing reusable test cases. This method is being used by various organizations across the world.
He is also the inventor of Linguistic Analysis technique for identification of large number of tests from minimal documentation in shortest time possible.